When I was young I fell in love with fairy tales and I always wished some of them were true. Not the original Grimm’s Fairy tales or Hans Andersen kind, but more Enid Blyton or Beatrice Potter-like. Then, I discovered Harry Potter and Artemis Fowl and with a bitter-sweet poignancy  I wished all of it was true.

Artemis Fowl is an odd boy. He is villainous but he believes in fairies (like me, but I am very nice). Then, he catches one under an oak tree and all hell breaks loose in the fairy tale. The fairies in Eoin Colfer’s eight book saga gain their super powers from not just magic but advanced technology. They live in underground cities after being chased away by human toxicity.

Artemis starts off as the genius spoilt brat who picks on people weaker than him for his own amusement (read fairies) but during the course of eight books he slowly becomes a criminal with a reason for his crimes. A pint sized Robin Hood with a conscience. Unlike Harry Potter, Artemis has never been just a child hero in a fantasy novel. He has always teetered on the edge of being the anti-hero or the villain of the piece. All his dilemmas have been of his own making and the situations that he deals in are real world adult problems. Artemis Fowl II is a cross between William (Richmal Crompton), Richie Rich (Harvey Comics) and Peter Pan.

On discovering Eoin Colfer’s books I felt that I had found the perfect books. They had magic, 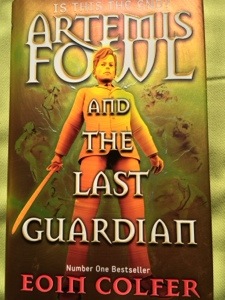 crime and drama, my perfect ingredients for a good book. Also, the author managed to make each book more complex and gripping than the previous one. Unlike Rowling, who was telling one story in seven books, Colfer had seven villains (one made two appearances). So, you can actually start reading them in the middle of the series. The Fowl series are for all ages from 9 to 90 so, if you are strict about what your children read and are in the habit of reading the books they read, do pick these up. You will surely enjoy them. Just don’t bury an acorn in the moonlight yet!

My first copy of Artemis Fowl was stolen on a train in India. I bought another copy at an old bookshop. It wasn’t the same but I couldn’t bear to lose it. My love-affair with old books never ceases!

Find out more about Artemis Fowl and where to buy them.

Which fantasy series or book do you like best?

I had to start of my #atozchallenge with a bit of fairy dust. Stay tuned for more magic on The Book Drifter and adventures on the Drifting Traveller.